The studio style Practical evening was, as ever, a bit of a frantic blur for me. From the moment Alan picked me up to the final unloading of the equipment back at home, everything was just ‘go’. The two setups were, intentionally quite different. Classical head and shoulders portrait and blown white full length. 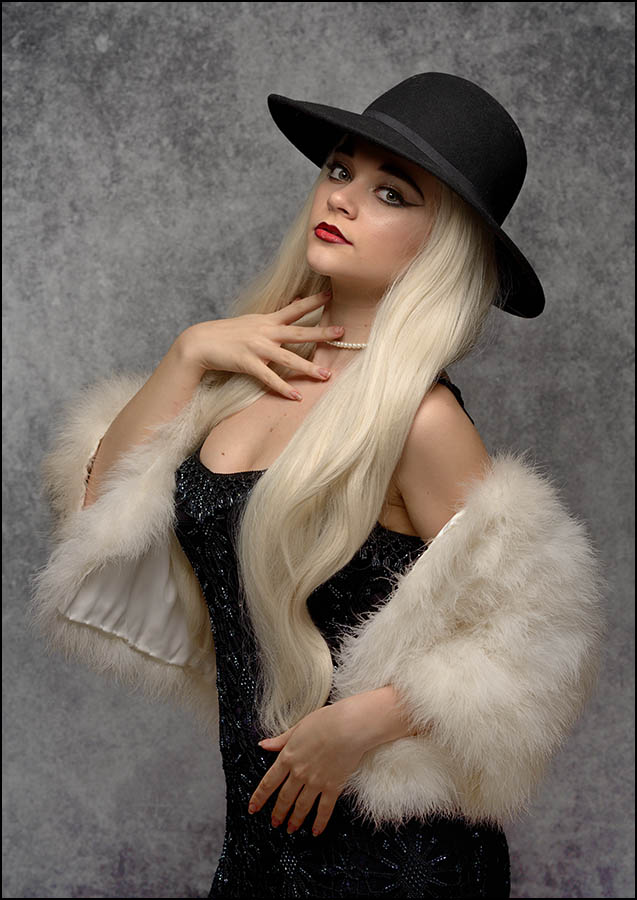 For the portrait setup a Hensel ExpertD 500 was fitted with a white Hensel beauty dish ( ACW ). This was on a Manfrotto boom stand to enable it to be directly above the sitter. The background was a Lastolite ‘Smoke’ collapsible with two black backgrounds for flagging off reflected light. This background was lit with another Hensel ExpertD head, this time fitted with a background reflector. To lift the shadows under the chin a Lastolite triflector was used. I’d prefer to use a single reflector or another flash head but the triflector was the simplest ‘quick’ option. The problem with the triflector is that sometimes you can see a reflection of the three panels.

How sharp is too sharp ?

The second setup used was for a blown white background. This is NOT ‘high-key’. For this some older Hensel Expert Pro 500 flash heads were used. The key light was a Westcott 7’ silver umbrella with a diffusion sock. This gives a large and relatively even light source. This is not as forgiving as a soft box but quicker and a lot cheaper than a 7’ Octabox. The background was a Lastolite HiLight with 2 flash heads used to get the blown white background. With this setup you need to not get too close to the background or wrap-around light will lead to lost detail.

Both setups were set to ISO 100, F8. For those with cameras that have a base ISO of 200 they needed to use an aperture of F11. Shutter speed was determined by the trigger being used and the camera’s flash sync speed. This exposure was determined by metering the setups. Get it ‘right’ and you can do white clothing against a white background.
The models, Bella and Chris, definitely met my expectation in terms of the clothing sets, looks and posing. They were also very calm and patient, just right for the type of evening that it was. Both from the positive comments that people made about them and the way those who wanted to engage did so I know that they did a good job for something that is not easy to do.
Another thing that will not necessarily be easy is the judging of the next few competitions. I anticipate that there will be quite a few entries from the evening. Some images that I’ve seen have been very different creations compared to those that the rest of us will have. I don’t think you need to guess whose those are…………..

Bring on next year’s one, or maybe people would like two such sessions.